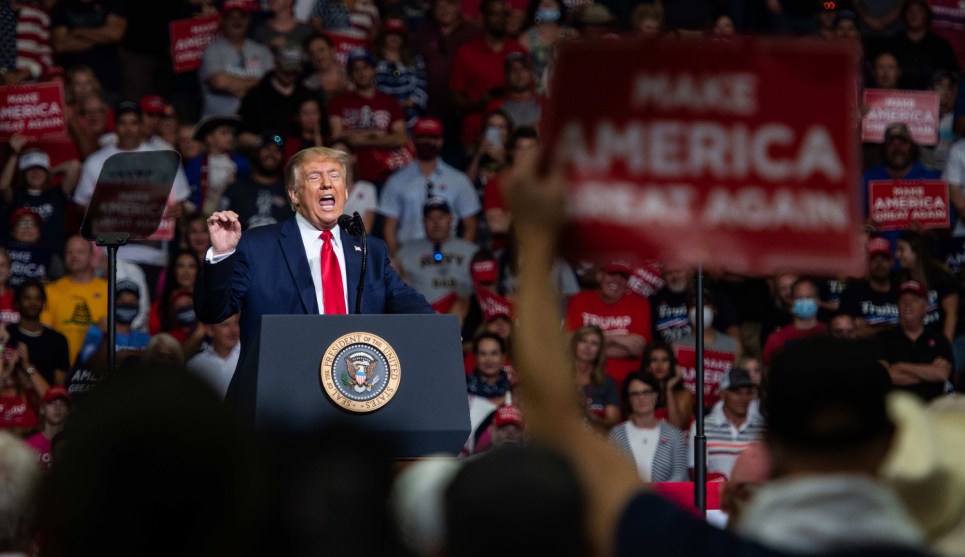 President Trump campaign staffers who attended a recent rally in Tulsa, Oklahoma are being required to get tested for the coronavirus after eight people connected with the re-election bid tested positive, according to a memo obtained by ABC News on Friday.

The memo said explicitly that staffers “are required to obtain a negative COVID-19 test this weekend,” ominously leaving out the fate of staffers who test positive. The staffers who have already tested positive are still working while self-quarantining, according to a report.

Trump campaign staff were informed Friday night via email that all who were in Tulsa for last weekend’s rally “are required to obtain a negative COVID-19 test this weekend,” according to an email obtained by ABC. Reporting w/ @wsteaks & @Santucci

Trump defiantly chose to proceed with the campaign rally despite surges in confirmed coronavirus cases across the country. As my colleague Jacob Rosenberg reported, Trump’s campaign didn’t even bother reaching out to local health officials to discuss the health implications of his rally. Oklahoma reported nearly 400 new cases in 24 hours, local news noted on June 26.

In addition to concerns over Trump rallies potentially being hotspots for spreading the virus, the rally had initially been scheduled for Juneteenth, the day celebrating the emancipation of enslaved Black people after the Civil War, in a city in which white mobs massacred a thriving community known as Black Wall Street in 1921. After public outcry, the Trump campaign decided to bump it back by one day.

Talk about failing to read the room.

Mark Helenowski/Mother Jones For indispensable reporting on the coronavirus crisis and... more»

A Michigan girl was incarcerated in May after she allegedly failed to finish her online... more»

Fight the power! Celebrities such as Jane Fonda, Ted Danson and Amy Schumer have proven they... more»

California Gov. Gavin Newsom pressed the panic button on Monday and locked down his state... more»

MOBILE, Ala. — As a longtime senator from Alabama, Jeff Sessions did nothing less than... more»

Kale, kale, kale! We just really love the hearty, healthy green. If you do too, we’ve got... more»

UK reverses decision to give Huawei role in 5G development

Benjamin Keough’s Pal Says He Was a ‘Wonderful, Magical Person’

Benjamin Keough, the son of Lisa Marie Presley and grandson of Elvis Presley, is being... more»

In addition to Harvard and M.I.T., the attorneys general of 20 states, including Massachusetts... more»

RELATED STORIES Sorry, Kidding fans, but we’re not kidding about this news: Showtime has... more»

A Michigan man suspected of stabbing an elderly man outside a convenience store after being... more»

These low-carb Salmon Croquettes with Dill Sauce are healthier than traditional deep-fried ones... more»

Local, sustainable, authentic: These are today’s buzzwords, but decades and centuries ago,... more»

Easy macaroni salad filled with noodles, veggies, bacon and cheese. Then tossed in a creamy and... more»

It barely gets a headline these days, but we thought readers might like to know that federal... more»

How to Make Singapore Noodles

LONDON — Britain announced on Tuesday that it would ban equipment from the Chinese... more»

How to Make Veggie Noodles

That sense of authorship extends to how the player approaches encounters too. Most of the... more»

Better safe than sorry! Celebrity parents have been giving their children masks while hanging... more»

The Divisive Impact of Brettanomyces in Wine

Winemakers will tell you that Brettanomyces is either the root of all evil, or amazing yeasts... more»

What Time Do Polls Close in Alabama, Maine and Texas?

Core the tomatoes and score the base with an “X”—this makes it easier to remove their... more»

Are 20 Million People at Risk of Eviction by September? – Mother Jones

I’ve seen quite a few pieces lately about the dire condition of renters and homeowners as... more»

A map created by health experts tracks each state response to the coronavirus... more»

Man’s best friend. Armie Hammer was spotted in Los Angeles for the first time since... more»

The Case for Reopening Schools

Everything else about the coronavirus has become politicized in America, so why not a return to... more»

Meet the two Democratic operatives battling President Trump since before he was president. LEARN... more»

Protein From Plants a Recipe for Longevity

There are many reasons why choosing plant protein over animal protein could help extend your... more»

History is clearly repeating itself, and it appears little has changed when it comes to... more»

A group of 83 of the richest people in the world have called for “our governments to raise... more»

Investigators on Monday were “confident” they had found the body of Naya Rivera, a star in... more»

Glee‘s Jane Lynch and Chris Colfer are among those mourning the death of their onetime... more»

This is yet another view of Slot Canyon X from my Arizona trip earlier this year. I wonder how... more»

What is Malt in Beer?

Malt, or grains processed for brewing, is critical to a beer’s style. The grain bill delivers... more»

Celebrities flooded social media with tributes to Kelly Preston, who died at the age of 57 on... more»

Celebrate taco night with these juicy steak tacos! Coated in a a flavorful marinade, then... more»

Of Pardons and Presidents

Of Pardons and Presidents LEARN MORE ABOUT THIS GREAT SOURCE... more»

How Russia Built a Channel to the Taliban, Once an Enemy

KABUL, Afghanistan — During one of the most violent stretches of fighting in northern... more»

Coronavirus May Pass From Mom to Baby

The group of eight men sits in a semi-circle at Oregon’s Eola Hills Wine Cellars,... more»

Kelly Preston died on Sunday, July 12, at the age of 57 after battling breast cancer. “It is... more»

Bold and the Beautiful Return Date: Here’s When New Episodes Will Air

RELATED STORIES The Bold and the Beautiful, which was the first scripted series to resume... more»

One of the most maddening things about the federal government’s response to the coronavirus... more»

The U.S. Marshals Service is investigating after a protester was badly injured this weekend at... more»

Authorities used a photo that Naya Rivera took of her son, Josey, shortly before she went... more»

WASHINGTON — The first federal inmate in 17 years is set to be put to death on Monday,... more»

Bombay Sapphire, the world’s number one premium gin by volume and value, announces its... more»

Fire Breaks Out on U.S.S. Bonhomme Richard in San Diego

A fire broke out on the U.S.S. Bonhomme Richard at the U.S. Naval base in San Diego on Sunday,... more»

Chip Somodevilla/Getty For indispensable reporting on the coronavirus crisis and more,... more»

Shooting outside Michigan apartment party sends at least 5 to the hospital: reports

Five people were shot early Sunday morning in Lansing, Michigan, with all victims taken to the... more»

If you’re looking for a Caribbean style Curry Chicken with rich flavors of spices, deep... more»

This chocolate clafoutis combines the creamy texture of the classic French dessert with a rich... more»

It goes down in the DMs! 50 Cent shared a screenshot of his private conversation with Will... more»

This chipotle black bean burger recipe comes together in under 30 minutes! Make it once, and... more»

Seeing Red—and Other Books to Read

Seeing Red—and Other Books to Read LEARN MORE ABOUT THIS GREAT SOURCE... more»

The Post-Pandemic Litigation Surge: How to Prepare Your Restaurant for Covid-19 Litigation

By Harlan Watkins and Geoffrey Macbride   The Covid-19 pandemic has upended the restaurant... more»

Trump vs. the Women Who Lead Michigan: A Battle With 2020 Implications

Australian teenager, 15, killed in shark attack while surfing, 2nd such death in a week: reports

A 15-year-old Australian died Saturday when he was mauled by a shark while surfing —... more»

With Vintage Bottles and Dry Expressions, Port Goes Beyond Dessert

A rich, fortified wine, Port is widely recognized as a dessert or digestive drink but isn’t... more»

Bachelor baby bump! Jade Roper has been sharing pregnancy pictures since her and Tanner... more»

This weekly feature is in addition to TVLine’s daily What to Watch listings and monthly guide... more»

For the first time ever, the chocolate and pastry experts at Valrhona are proud to offer a... more»

A newly erected fence blocks the front of a vacant home that Moms 4 Housing activists... more»

Hootie & the Blowfish singer Darius Rucker announced on Saturday, July 11, that he and his... more»

Ledo Pizza announced this week that the company has promoted Will Robinson from vice president... more»
Green Chile Chicken Enchiladas RecipeTV Schedule: What to Watch the Week of June 28 — Penny Dreadful Finale
error: