The Phrase “Storm the Capitol” Was Used 100,000 Times Online in the Month Leading Up to the Mob – Mother Jones 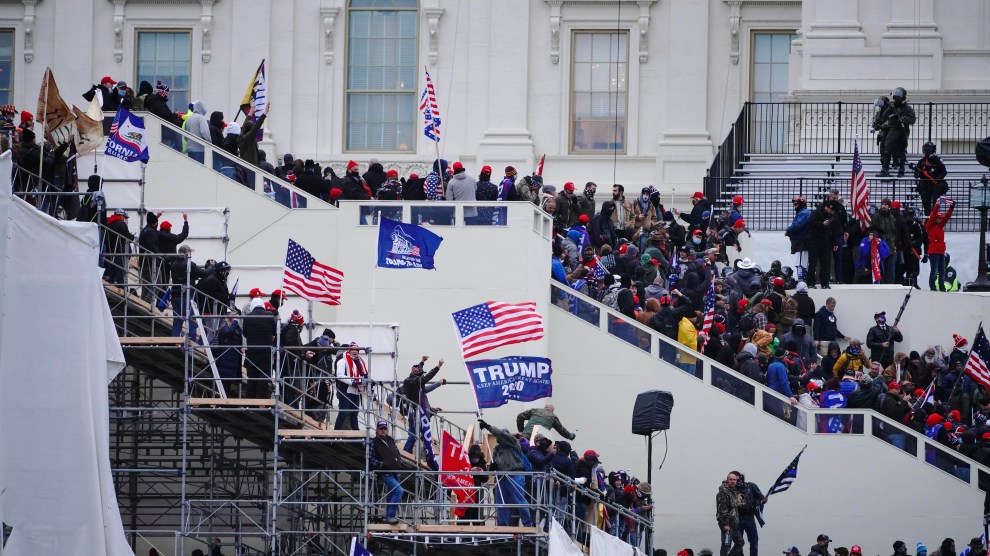 The US Capitol Building in Washington, DC, was breached by thousands of protesters during a “Stop The Steal” rally in support of President Donald Trump on Wednesday. John Nacion/STAR MAX/IPx via AP

When a mob of Trump supporters stormed the US Capitol on Wednesday, law enforcement appeared to have been caught off guard—badly outnumbered by the insurrectionists, and sometimes standing aside as people infiltrated the building with zip ties and Confederate flags, as members of Congress cowered in fear nearby. Afterward, some Capitol Police officers put out a blistering statement blaming their leadership for poor planning.

But if law enforcement officials were in fact caught off guard, it wasn’t for lack of warning: Insurrectionists were writing openly online about their goal to violently invade the Capitol for weeks before they did so, on several social media platforms. The term “Storm the Capitol” was used a whopping 100,000 times online in the month before January 6, according to a New York Times article that cited Zignal Labs, a media insights company. Many of these posts appeared in comments on viral tweets, and included explicit details about how to get inside the Capitol building.

Some of the commenters were militia members and supporters of the QAnon conspiracy theory. “Pack a crowbar,” one person wrote on the social media site Gab, which is popular among the far right. “Does anyone know if the windows on the second floor are reinforced?” someone asked in another thread, according to the Times.

Before the mob on Wednesday, a nonpartisan research organization called Advance Democracy Inc. published a report showing a spike in violent online rhetoric among Trump supporters. Last Monday, more than half of the top posts on a pro-Trump forum called TheDonald.win included calls for violence in the top five comments, with some people talking about how to sneak firearms into DC.

Similar posts were proliferating on Twitter, TikTok, and Parler, a social media site that is popular among the far right and advertises itself as a “free speech” alternative to Twitter, which recently suspended President Donald Trump’s account. The ADI researchers spotted at least one Parler post about hanging Vice President Mike Pence, who was criticized by Trump for cooperating with plans to certify the presidential election results in favor of Joe Biden.

The rhetoric began even before the election. Back in October, I wrote about a pro-Trump attorney named Lin Wood who was spouting conspiracy theories to his 191,000-plus followers on Twitter about his belief that freedom-loving Americans would need to stand up against liberals who he said were planning a coup of the White House. In the weeks after November 3, Wood filed a lawsuit attempting to stop Georgia from certifying Biden’s win, and trumpeted Trump’s lie that Democrats stole the election. Ashli Babbitt, who was shot and killed by a police officer on Wednesday while trying to gain access to the Speakers Lobby, reportedly retweeted Wood’s posts numerous times.

As the FBI tries to track down the insurrectionists who have since returned to their homes around the country, there are plenty of signs online that another siege may be in the works. Twitter has warned that “plans for future armed protests have already begun proliferating,” including a second attack on the US Capitol and state capitols on January 17. Private chat groups on Gab and Parler are also talking about disrupting Biden’s inauguration on January 20 with a “Million Militia March,” according to the Times. People are posting about ride shares and packing lists—some suggest bringing baseball bats, and others assault rifles. On Thursday morning, Wood reportedly posted a note on Parler, which has since been removed, that read: “Get the firing squad ready. Pence goes FIRST.” If a violent mob swarms the inauguration, now there’s really no way for any police detail to argue it hasn’t been warned.

Not wasting any time! Bachelorette alum Spencer Robertson was quick to ask Clare Crawley out... more»

Mr. Burr’s remained open months longer. Though he did not contest that he sold much of his... more»

This Polpette Recipe Is the Perfect ‘Emptying-Out-The-Fridge’ Dish

Breast Cancer and Chronic Inflammation: Is There a Link?

Cordell Walker is described in the season premiere as “The edge of the coin,” someone who... more»

Panel: China, WHO should have acted quicker to stop pandemic

GENEVA – A panel of experts commissioned by the World Health Organization has criticized... more»

The Unexpected Vitality of Winter in the Vineyard

Unlike the lush growth spurred by summer, winter pares a vineyard down to its bones. Vines drop... more»

Two of my favorite dishes combined! Stewed chicken with Spinach, a dish I make with dasheen... more»

For example, take one of the centerpieces of the Obama plan: “Reverse” revolving door... more»

Ward off cold weather with these vibrant winter salad recipes! Flavorful and fresh, they use... more»

Courtesy of Barton G. When one thinks of Miami, visions of sun-kissed surf, blue skies and warm... more»

Can We Have Half the Country Vaccinated by the End of March? – Mother Jones

Here’s an odd thing. I was looking at the numbers for vaccinations and it turns out that on... more»

Nearly 192,000 American, state flags on display at National Mall ahead of Biden inauguration

Nearly 192,000 American and state flags are now on display at the National Mall ahead of Joe... more»

Stouts and Sours: How to Set Up a Vertical Tasting of Your Favorite Ageworthy Beer

Wine drinkers and collectors understand some bottles get better with age. To cellar and age... more»

Love is all around! Olivia Munn shared her well wishes for ex-boyfriend Joel Kinnaman after he... more»

Elise Stefanik grew up in a working-class family in upstate New York, where her father and... more»

WASHINGTON — The White House released the report on Monday of the presidential 1776... more»

Uganda accuses US of trying to ‘subvert’ elections after ambassador blocked from visiting Wine’s home: report

Uganda accused the U.S. of meddling in “internal politics” on Tuesday after... more»

Two of the knots, they concluded, were probably small galaxies with small internal motions... more»

‘The Good Doctor’ Recap: Season 4, Episode 7 — Lea Has an Ex-Husband

RELATED STORIES This week on The Good Doctor, Shaun weighs the pros and cons of having shower... more»

A Homeless Shelter in 5 Months? LA Shows It Can Be Done. – Mother Jones

A pair of homeless people on Skid Row, about a mile from the Vignes Street project.Kevin... more»

Coronavirus surge increases strain on funeral homes: ‘Our morgues are too full’

As refrigerated trucks arrive at states across the country, funeral homes say they are turning... more»

Good things are always brewing at Full Sail. The latest release in the craft brewery’s... more»

Clearing the air. David Sutcliffe denied any participation in the violent march on the U.S.... more»

They Did Their Jobs Well

As the Trump Presidency ends in the disgrace of the Capitol riot, an effort is already underway... more»

Those under consideration include such disparate figures as Sheldon Silver, the disgraced... more»

The Words of Martin Luther King Jr. Reverberate in a Tumultuous Time

For Antwan T. Lang, a member of the Chatham County Board of Elections in Savannah, Ga., Dr.... more»