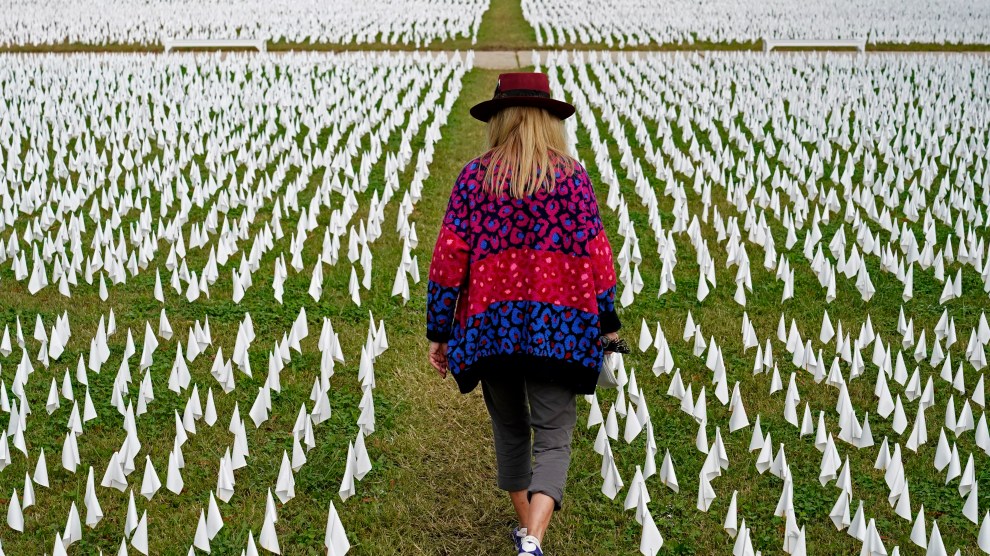 Artist Suzanne Brennan Firstenberg walks among thousands of white flags planted in remembrance of Americans who have died of COVID-19 in October 2020.Patrick Semansky/AP

“People decades from now are gonna be talking about this as a terribly historic milestone in the history of this country, to have these many people to have died from a respiratory-borne infection,” Dr. Anthony Fauci said in a CNN interview Monday morning. “It really is a terrible situation that we’ve been through, and that we’re still going through.”

It’s nearly impossible to conceive of the loss of half a million Americans. The virus has killed one in 670 people across the country. In places like New York City, the number is closer to one in 295. President Biden will hold a memorial ceremony this evening and will order flags on federal property to fly at half staff for five days.

COVID-19 infection rates in the US have fallen dramatically since their January peak, and more than 13 percent of the country’s population has received at least one vaccine dose. Still, public health officials are urging the public not to let their guard down. At a White House COVID-19 response team press briefing this afternoon, Fauci reiterated that people should continue wearing masks because of the possibility that people who have been vaccinated could still be infected and spread the disease asymptomatically.

“There will be things that you will not be able to do because the burden of virus in society will be very high,” he said. “We are still at an unacceptably high baseline level with the seven-day average being quite high.”

It was a little less than a year ago that then-President Trump declared that the coronavirus was “going to disappear.” Lockdowns in New York City, one of the initial epicenters, began in mid-March 2020. Since then, the world as we knew it has disappeared.

Make Cocktails Like a Pro with Eight Great Mixers

Your bar might be stocked with the finest spirits and tools, but a good mixer is... more»

Asked when the process would end, Senator Mike Braun, Republican of Indiana, observed, “I... more»

We Asked a Doctor All Our COVID-19 Vaccine Questions

Correct. One of the things I’ve heard people express concern about is that somehow the cells... more»

Congress’ stock trades became a hot topic after several members of Congress were revealed to... more»

JUST BECAUSE YOU ARE HOME AGAIN THIS PASSOVER, DOESN’T MEAN YOUR TASTEBUDS CAN’T ENJOY A ROUND-THE-WORLD ADVENTURE —

This Passover, spend your holiday in Israel, Italy, or France — without ever having to leave... more»

People detained by Immigration and Customs Enforcement exercise at the Adelanto detention... more»

The Pros and Cons of Self-Distribution for Independent Winemakers

Before he became a winemaker, Craig West worked in distribution at Semifreddis Bakery in... more»

This better-for-you maple cheesecake tastes incredibly rich, yet it is much lower in calories... more»

What is Dispo? The photo sharing app everyone’s talking about

Against the Wave of Anti-Asian Violence and Hate

Meghan Markle’s Ups and Downs With the Royal Family: Timeline

It’s been a rocky road for Meghan Markle and the British royal family since she fell in love... more»

THE MAN WHO BUILT MIAMI BEACH

The Dancing Goat Distillery in Cambridge, Wisconsin has begun rolling barrels of its... more»

WASHINGTON — A new C.I.A. task force is trying to expand efforts to find the cause of a... more»

Love Tequila and Mezcal? Drink In These Other Agave Spirits

For those who already enjoy Tequila and mezcal (and even those who don’t), there’s more in... more»

The main anchor for Paramount+ is the long history of the CBS networks, including not only the... more»

It was almost the reunion everyone wanted. The Real World Homecoming: New York premiered on... more»

Rick Scott gets no love from the MAGA-verse

Though Scott has been unbeatable since first running for statewide office in 2010, the tone and... more»

‘A Nightmare Every Day’: Inside an Overwhelmed Funeral Home

At the entrance of the chapel lobby, look first to the left: four bodies under white sheets on... more»

RELATED STORIES It looks like Studio 6B is now inside The Hex. On Wednesday’s episode... more»

An officer with the Los Angeles Police Department has died after a vehicle struck him on... more»

Starship prototype SN10 returns for a soft landing on a concrete pad at the company’s... more»

Not so fast! Olivia Rodrigo revealed that she barely knows Sabrina Carpenter despite claims... more»

A dump truck moves raw ore inside the pit at the Mountain Pass mine, operated by MP... more»

“Public servants, especially those responsible for leading tens of thousands of other public... more»

In this episode of the Wine Enthusiast Podcast, we talk about the world’s most popular white... more»

All the COVID Variants of Concern

As for the male contenders, Jared Leto, who was up for Best Supporting Actor for “The Little... more»

Dispatching from the Oregon coast…Pulled in 4 Dungeness crabs. @Lucas Sin, seeking your... more»

Migrants crossing the U.S.-Mexico border on Tuesday were photographed wearing T-shirts in... more»

Plan to Ditch the Mask After Vaccination? Not So Fast.

With 50 million Americans immunized against the coronavirus, and millions more joining the... more»

‘Low in Alcohol and Refreshingly Tart’: 10 Kettle Sours to Try

The kettle sour category has become a catch-all term for brewers who want to describe any... more»

Just weeks ahead of The Simpsons‘ 700th episode, Fox has renewed the long-running animated... more»

Here’s a dish which can be a soup (as I treated it today), a stew (add some cubed potato and... more»

The authors broadly define namul as “foods made by seasoning and mixing edible plants or... more»

Virginia Commonwealth University is launching a wide-ranging review of Greek life on campus as... more»

Put a Cork in It? The Wine Closure Industry is Changing

The next time you open a bottle of wine, take a closer look at the stopper, or maybe even give... more»

Chocolate cake pops are taken up a notch with this recipe using 3 times the chocolate! These... more»

The plaintiff bar long ago turned mass torts into a business model, but never underestimate... more»