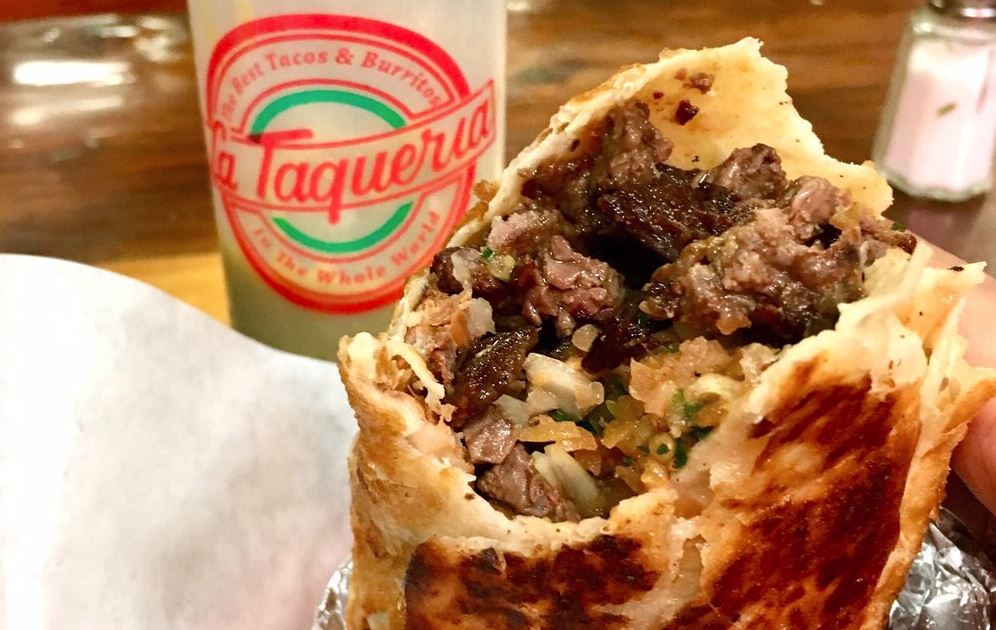 It’s hard to argue that the burrito isn’t a perfect food. It’s a savory, handheld package filled with a wide variety of compatible ingredients. The burrito is infinitely customizable and adaptable and even potentially vegetarian- or vegan-friendly. But if you’ve been around the burrito block a few times, you probably know that most burritos are good but some burritos are great. And if you want to try America’s greatest burrito, then you should visit La Taqueria in San Francisco.

The Best Taco in Every State

Run by Miguel Jara and his family since 1973, the always-bustling La Taqueria isn’t just San Francisco’s most famous burrito joint, it’s also its best. It all comes down to the quality of the ingredients, and the care that Jara puts into making every component of every burrito. According to Eater, the carne asada (the most popular filling option) is thin-sliced top sirloin, brushed with a secret marinade and grilled fresh throughout the day. Carnitas are simmered with aromatics, slow-cooked in their own fat until crispy and then griddled and chopped to order. And even the beans are carefully cooked, boiled for three hours, fried for an hour and served whole.

La Taqueria is located in San Francisco’s Mission District, which is famously the birthplace of the Mission-style burrito, which is big, bountiful, rolled up tight and foil-wrapped. (This style was the inspiration for Chipotle and is therefore what many of us think of when we think of a burrito). The “super” burritos here are steamed with a slice of Monterey Jack cheese, then beans, meat, fresh pico de gallo, avocado, sour cream and serrano pepper-based hot sauce are rolled up inside. (La Taqueria bucks the standard Mission-style burrito trend and dispenses with the rice.) If you ask for a burrito dorado — which you absolutely should — it’ll be seared on a plancha until golden brown on both sides.

Are you hungry yet? One bite of this burrito and you’ll agree that it’s an absolute masterpiece. Not only is it one of the 101 most iconic dishes in America, but it also ranks No. 1 on our list of the best burritos in America.

January 19, 2020
The new TIFFIN BOX Restaurant (tiffinboxeats.com) opened in early October and is located at 2491 Okeechobee Blvd, WPB in the Westward Shopping Plaza next to ALDI. It’s the brainchild of Anesh Bodasing, the guy behind the crazy idea of “Americanizing” Indian Food. “I’ve had this idea brewing for the past 12 years and was confident there would be interest in Fast, Fresh Indian Food.  Think of us as an Indian Chipotle.” Bodasing explains. His family has been in South Africa for 7... more»

January 19, 2020
Illegal crossings at the U.S.-Mexico border plummeted after the Trump administration required asylum seekers to wait in Mexico for court hearings in the U.S., according to a report. When the policy took effect in the Border Patrol’s Yuma sector in May, arrests hit 14,000. By October, they had fallen 94 percent, or around 800, and have stayed there since, making Yuma the second slowest of the agency’s nine sectors on the U.S.-Mexico border, according to statistics cited by The... more»

January 19, 2020
Rep. Pramila Jayapal Bill Clark | Getty Images Rep. Pramila Jayapal (D-Wash.), a co-chair of the Congressional Progressive Caucus and one of the most prominent women of color in Congress, is endorsing Sen. Bernie Sanders for president. Her choice could bolster Sander’s strength on the left and give him an advantage over his opponent Sen. Elizabeth Warren in the closing weeks before the first nominating contest in Iowa on February 3. Jayapal, the lead sponsor of the House... more»

January 19, 2020
BERLIN/BENGHAZI, Libya (Reuters) – Foreign powers agreed at a summit in Berlin on Sunday to strengthen an arms embargo on Libya and shore up a shaky ceasefire, but the meeting was overshadowed by blockades on major oilfields by forces loyal to commander Khalifa Haftar. Haftar, whose self-styled Libyan National Army (LNA) is bearing down on the capital Tripoli with the backing of Egypt, the United Arab Emirates, Russian mercenaries and African troops, attended the one-day summit in... more»

January 19, 2020
Like a secret blend of seasonings in your signature dish, the barrel in which wine is aged lends distinct characteristics. Some savvy producers use this influence as an advantage, and work with cooperages to specify the density of wood grain or adjust toast levels. Others go a step beyond, however, and create custom barrels.  Grain Upgrade Weingut Maximin Grünhaus in Germany’s Mosel Valley is one of the few producers in existence to craft barrels from its estate’s forests, but others... more»

January 19, 2020
Defense attorneys for the man charged with murdering 20-year-old University of Iowa student Mollie Tibbetts filed a motion Sunday asking for another delay in the start of the murder trial scheduled to begin February 4 in Sioux City, Iowa. In the motion, the defense presents a list of reasons for its requested delay — including the necessity to depose new “critical” witnesses brought by the state, including Tibbetts’ boyfriend, Dalton Jack. The defense also alleges the state did... more»

January 19, 2020
[This livestream is slated to begin at 10:30 a.m. ET. Please refresh the page if you do not see a player above at that time.] SpaceX is expected to conduct its last test before flying astronauts to space on Sunday, in a critical high-speed mission likely to last mere minutes. Launching on top of a Falcon 9 rocket from a launchpad at NASA’s Kennedy Space Center, the company will conduct a test of its Crew Dragon capsule called in-flight abort. It’s a crucial milestone for Elon... more»

January 19, 2020
In the Caribbean our dishes are famous for being cooked low and slow.. some may even argue that we over-cook some of our dishes. However, you really can’t argue once you taste our culinary delights. Such is the case for stewed pigeon peas. Typically if you were using freshly picked pigeon peas, you’d have this cook for 1.5 to 2 hours. The reality is, there are times we just don’t have time and we just want to enjoy something delicious and fulfilling. This pigeon peas recipe is the... more»

January 19, 2020
BERLIN (Reuters) – Countries struggled at an international peace summit for Libya on Sunday to draw eastern military commander Khalifa Haftar back into diplomacy, days after he quit talks and more than half of Libya’s oil output was shut in areas he controls. FILE PHOTO: Libyan commander Khalifa Haftar meets Greek Prime Minister Kyriakos Mitsotakis (not pictured) at the Parliament in Athens, Greece, January 17, 2020. REUTERS/Costas Baltas Haftar, whose forces are bearing... more»

January 19, 2020
Stir in pork, mushrooms, and scallions and let simmer, stirring occasionally, until flavors have melded, another 5 minutes. Check the texture: If you want a thinner congee, add more water. If you want a thicker, more oatmeal-like texture, continue to cook, stirring frequently, until it reaches the desired consistency. Season soup with kosher salt and white or black pepper. Source link... more»
This site uses cookies: Find out more.